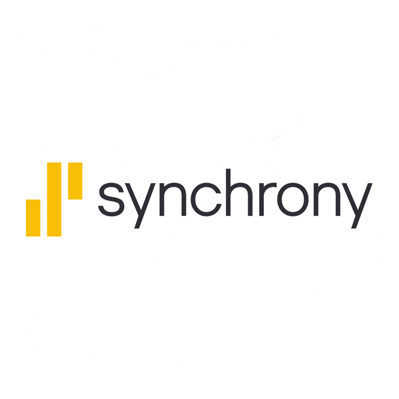 Synchrony traces its roots to 1932. GE Capital Retail Bank was started during the Great Depression, providing customers a line of credit to purchase GE appliances. The lending arm remained GE Capital Retail Bank until being spun off from its parent company in June 2014. GE filed with the Securities and Exchange Commission on March 13, 2014 announcing its intention to spin-off the portion of its GE Capital business dedicated to retail credit cards. GE's SEC filing indicated that the new company would be called Synchrony Financial. On July 31, 2014 Synchrony Financial raised $2.88 billion in its initial public offering.

In 2018, Synchrony acquired Loop Commerce, which provides a patented digital gifting platform called GiftNow. In 2018, Synchrony's largest program was the acquisition of PayPal's $7.6 billion credit receivables portfolio. PayPal also chose Synchrony Bank to be its exclusive issuer for the PayPal Credit point of sale financing program in the United States through 2028. Additionally, PayPal agreed to extend its existing co-brand credit card relationship with Synchrony through the same 10-year term. These transactions (collectively, the "PayPal transaction") officially closed in July 2018.

In 2019, Synchrony announced the acquisition of Pets Best, which offers pet insurance and wellness plans for dogs and cats. Pets Best will operate under Synchrony's CareCredit platform.