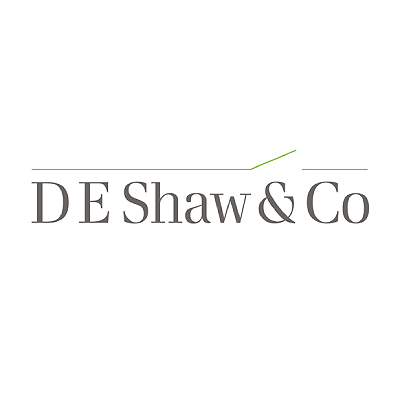 D. E. Shaw & Co., L.P. is a multinational investment management firm founded in 1988 by David E. Shaw and based in New York City. The company is known for developing complicated mathematical models and sophisticated computer programs to exploit anomalies in the market. D. E. Shaw & Co. manages $50 billion in AUM, $30 billion of which are alternative investments and the remaining $20 billion long-oriented investments (as of September 1, 2020). In 2018, Institutional Investor reported that among hedge funds, D. E. Shaw & Co. had delivered the fifth-highest returns in the world since its inception.

The company was founded by David E. Shaw, a former Columbia University faculty member with a doctoral degree from Stanford. D. E. Shaw began investing in June 1989, having secured $28 million in capital from Paloma Partners Management Co. and a couple of private investors. The company's first office was small and located above a bookstore near New York University. By 1990, the company had moved to a loft on Park Avenue South, and it relocated again the following year to Tower 45 on West 45th Street.

From the start, the company has carefully protected its proprietary trading algorithms. Many of its early employees were scientists, mathematicians, and computer programmers. Believing that recruiting would give his start-up a competitive advantage, David E. Shaw courted top-performing graduates from the nation's top ranked colleges and universities. The focus of recruiting shifted to liberal arts graduates in early 1992.

By the mid-90s, confidentiality was ingrained in the company culture.

David Shaw has also placed heavy emphasis on risk management and the preservation of capital. Portfolio managers were expected to perform risk analysis. Eventually, the company would charge an executive committee and a chief risk officer with using scenario analysis and stress-testing to analyze risk at both the strategy and portfolio levels.

In 1994, the company's net return was 26 percent. It managed several hundred million dollars in "market-neutral strategies, including statistical arbitrage, Japanese warrant arbitrage, convertible-bond arbitrage and fixed-income trading." Its non-hedge fund activities in the mid-90s included setting up a broker-dealer subsidiary, founding the e-mail provider Juno Online Services, launching an online banking and brokerage firm, and opening an office in India focused on developing software and systems to support the company's trading operations and online businesses.

1997 - Collapse of a strategic alliance with Bank of America

In 1997, the firm returned capital to most of its early investors in favor of a structured credit facility of nearly $2 billion from Bank of America, with terms that allowed D. E. Shaw & Co. to keep a higher fraction of profits than hedge fund investors normally allow. In effect, Bank of America provided an infusion of $1.4 billion to D. E. Shaw, hoping to benefit from the latter's investment expertise. One year later, Russia defaulted on its debt, resulting in large losses for D. E. Shaw's fixed-income trading portfolio. As a result, Bank of America lost $570 million due to its investment in D. E. Shaw, and paid out an additional $490 million to settle associated shareholder lawsuits.

Following the collapse of this alliance, D. E. Shaw sold off business and laid off employees, reducing its core workforce from 540 employees in 1999 to 180. The company's capital shrank from $1.7 billion to $460 million.

David E. Shaw directed the company from 1988 to 2001. In 2002, he removed himself from day-to-day involvement in the company and transitioned leadership to a team of six managing directors: Anne Dinning, Julius Gaudio, Louis Salkind, Stuart Steckler, Max Stone, and Eric Wepsic. The company's management structure of the same six-member executive committee remained intact through 2010. In 2010, the company had more than 1,300 employees.

At the beginning of the financial crisis in August 2007, D. E. Shaw's multistrategy fund had assets of $20 billion. A third of the fund's exposure was to the equity markets and equity-linked quantitative strategies. As a result, the fund lost five percent of its assets and had its worst performing month to that point in time. By September 2008, the company's capital was leveraged at 4x. In the final months of 2008, subsequent gains on its then $15 billion multistrategy fund had disappeared.

Twenty percent of the company's assets under management were in its credit strategies and were the hardest hit during the financial crisis.

To avoid loss of portfolio value and asset firesales, D. E. Shaw displeased some clients by preventing the withdrawal of funds during the financial crisis. Those gates created time delays when clients requested that funds be returned to them. By 2009, D. E. Shaw had returned about $2 billion at clients' requests. One year later, the Financial Times reported that investors estimated that the company had honored an additional $7 billion in client redemption requests.

In September 2019, D. E. Shaw required all of its employees to sign non-compete agreements, which was traditional for the finance industry but not previously required at the firm, and received some backlash from those at the company.

Size of assets The company had $40 billion in aggregate capital and $15.6 billion in hedge fund assets under management as of 2011. It was ranked as the 21st-largest hedge fund by Institutional Investor.

In 2004, a subsidiary of one of the company's funds acquired the toy store FAO Schwarz out of bankruptcy. FAO Schwarz reopened for business in New York and Las Vegas in the fall of 2004. In the same year, D. E. Shaw affiliate Laminar Portfolios acquired the online assets of KB Toys, which continued operating as eToys.com. In August 2004, D. E. Shaw & Co., along with MIC Capital, proposed to inject $50 million into the bankrupt WCI Steel. In December 2004, D. E. Shaw & Co. bought 6.6 percent of USG Corporation, a wallboard manufacturer seeking bankruptcy protection as a result of rising asbestos liabilities.

In 2006, the Financial Times reported the firm's involvement as potential financing and investment partners for Penn National Gaming (the casino and racetrack company) as an example of the breadth of Wall Street firms' involvement in the "private equity boom," describing D. E. Shaw as "a hedge fund group." The financing was required as Penn National Gaming had a market value of $3.3 billion (2006) and $1.4 billion in annual revenues and wanted to acquire Harrah's Entertainment, a company with a market value of $14.7 billion (2006) and at that time the largest US casino operator.

In late 2009, the Financial Times reported that D. E. Shaw & Co. had set up a portfolio acquisitions unit, the aim of which was to acquire illiquid assets from rival hedge funds, during the financial crisis.

In 2007, David E. Shaw sold a 20 percent stake to Lehman Brothers as part of a broader strategy to diversify his personal holdings. D. E. Shaw had $30 billion of assets under management in 2007. At the time of its bankruptcy in September 2008, Lehman Brothers' holdings in D. E. Shaw & Co. remained intact. In 2015, Hillspire, the family office of Google chairman Eric Schmidt, acquired the 20 percent passive ownership stake in DESCO from Lehman Brothers Holdings Inc.

In 2007, the Financial Times reported that D. E. Shaw was commonly mentioned as a flotation candidate among hedge funds.