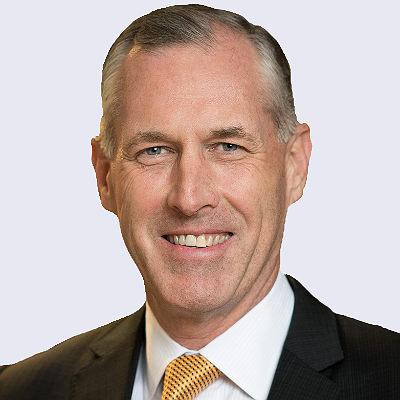 Jim Fitterling is the chairman and chief executive officer of Dow, a global materials science company with 2019 sales of $43 billion.

He has played a key role in the Company’s transformation, from lower-margin, commodity businesses to one more deeply focused on higher-growth, consumer demand-driven markets that value innovation – with the goal of creating the most innovative, customer-centric, inclusive and sustainable materials science company in the world.

Fitterling was named chief executive officer-elect of Dow in March 2018, prior to becoming CEO in July 2018. He was elected chairman in April 2020. Before that he served as president and chief operating officer of Dow. From September 2017 through March 2019, he also served as chief operating officer for the Materials Science Division of DowDuPont, an $86 billion holding company comprised of The Dow Chemical Company and DuPont, created with the intent to form independent, publicly traded companies in materials science, agriculture and specialty products sectors. On April 1, 2019, Dow separated from DowDuPont.

During his 35-year career at Dow, Fitterling has held leadership positions in many of the Company’s business units, in corporate development and in business operations. In addition, he served as the business lead in Dow’s successful launch of its next-generation sustainability goals. At his direction, in January 2019, Dow became a founding member of the Alliance to End Plastic Waste (AEPW), an initiative to accelerate efforts to drive innovation, provide much-needed resources, and take decisive action to put an end to plastic waste in the environment.

Fitterling is a passionate advocate for inclusion and diversity and leads Dow's drive to diversify its global talent.

He joined Dow in 1984, two weeks after graduating from college, and has spent a third of his career in Asia. He earned his bachelor’s degree in mechanical engineering from the University of Missouri - Columbia.

Fitterling is a passionate advocate for inclusion and diversity and leads Dow’s drive to diversify its global talent. He actively serves as Executive Sponsor of Dow’s Global African Affinity Network and is widely recognized for his work supporting LGBT non-discrimination and LGBT+ workplace equality. In 2018, he was named #1 LGBT+ Executive on the “OUTstanding in Business” list published annually by The Financial Times. He joined the Out Leadership Global Advisory Board in 2019.

He serves as the Vice Chair of the Board of Directors of the National Association of Manufacturers, and is on the Board of Directors for the American Chemistry Council, the U.S.-China Business Council and Business Roundtable, and the Detroit Economic Club. In addition, he is a Trustee of the Herbert H. and Grace A. Dow Foundation, and a member of theAmerican Heart Association’s CEO Roundtable and the Dean’s Engineering Advisory Council for the University of Missouri’s College of Engineering.

In 2018, Fitterling received the College of Engineering Alumni Award from the Mizzou Alumni Association for professional accomplishments and service to the university. He was honored in 2017 by the American Institute of Chemical Engineers (AIChE) with the “Doing a World of Good” Medal, for his dedication to safety in engineering, his advocacy of diversity and inclusion in the workplace and his professional and personal commitment to mentorship, and was inducted in the Great Lakes Bay Region Junior Achievement Hall of Fame in 2016 for his business and community leadership.

Dow Inc.
Dow Inc. is an American commodity chemical company. It was spun off of DowDuPont on April 1, 2019, at which time it became a public company and was added to the Dow Jones Industrial Average. The company...
Person in rating
All