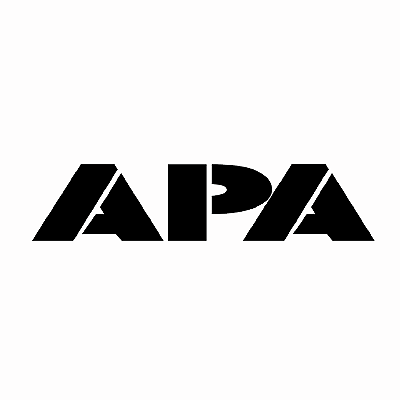 Agency for the Performing Arts

APA (also known as Agency for the Performing Arts) is one of the largest diversified talent agencies in Los Angeles with headquarters in Los Angeles, New York, Nashville, Atlanta, Toronto and London. Founded in 1962 in New York by a group of former MCA agents, the company represents actors, writers, producers, showrunners, directors, performers, physical production services, film studios, and luxury and lifestyle brands across all media platforms worldwide. The agency also packages feature films, as well as television series such as Away and Bridgerton on Netflix, The Dublin Murders on Showtime, All Rise on CBS, and For Life on ABC, as well as classic TV series Home Improvement and Roseanne.

APA has been a driving force behind such non-fiction series as Dance Moms (Lifetime), Leah Remini: Scientology and the Aftermath (A&E), Dr. Pimple Popper (TLC), Unidentified (History), and Blown Away (Netflix). The agency also represents the Executive Producers of hit non-fiction series such as Nailed It (Netflix), So You Think You Can Dance (Fox), Let’s Make a Deal (CBS), and Pyramid (ABC).

In 2017, then APA agent Tyler Grasham was accused of assaulting several current or former child actors, including Blaise Godbe Lipman (who stated that Grasham assaulted him 10 years earlier when he was looking for representation) and Lucas Ozarowski, a film and TV editor who stated that he was also assaulted by Grasham. Stranger Things star Finn Wolfhard, who was represented by Grasham at the time, terminated his relationship with Grasham. After a prompt investigation, APA terminated Grasham’s employment with the Agency.

In 2017, a former agent of APA accused the agency of sexual discrimination, harassment and assault. As evidence, the agent alleged that a partner at the firm sent her graphic text messages and threatened to have her fired when she refused their advances. An independent investigation into the matter found that the agent’s claims were fraudulent, and that she had fabricated emails and text messages to extort money from the agency. Accordingly, APA concluded that the allegations were false and filed a Demand for Arbitration pursuant to the agent’s employment agreement. Thereafter, the former agent filed a lawsuit in California Superior Court citing the same allegations, but APA was successful in moving to compel the matter to be decided by arbitration.